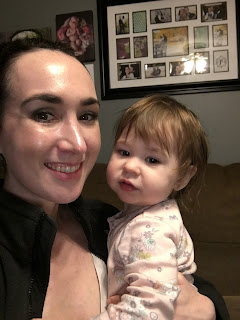 Posted by southwindjillian at 7:43 PM 3 comments:

Freshly asleep in my arms tonight, Phoebe made a little noise between a sigh and a coo and I was immediately taken back to babyhood.

I don't remember the last time she made such a wonderful peep. And it got me thinking about memory and our children.

How much do we really remember? What things last in our minds eye and what moments are forever gone?

I do not think I would remember much if I didn't have our journal.
When Phoebe was almost one month old I found a notebook my aunt gave me to "write down all the firsts... because you'll forget if you don't." I wrote a short sentence and dated it. Then I realized I had no recollection of the first few weeks of her life.

Sure I remembered the big things - bringing her home from the hospital, my family meeting her, our first nights together.

But I didn't remember her, specifically. What was she like when she was five days old? What did she smell like? What did she wear? What did I do all day with her?


Alas. That day is gone. So is five day old Phoebe and I'll never have her back.
And so every day now I write something, anything, so that maybe when she's 10 or 18 or 42 and I have forgotten what she was like, I can read about it and trigger a memory.


Time is a funny thing. It seems to drag on. And then suddenly another milestone hits and we've never stopped to realize how fast it actually goes.
Time doesn't stop.

The people you love grow old.
The babies your raise grow up.

And her little coo-sigh tonight at 15mo old reminded me again that my journal for her is so important.

What do you remember about your babies?