What Happened When I Let My Toddler Do Everything Herself

“Mama let me do it!!” My two year old yelled, wrenching her shorts from my hands. I got up and left, frustrated beyond belief of the past few weeks of the terrible twos.

I couldn’t seem to get through a day without frustrating my child and myself. It wasn’t that we didn’t like each other, we just couldn’t find a groove lately. We clicked so well during her baby hood. She and I were like peas in a pod, reading each other’s cues and blending like water and soil.

But toddlerhood... she just wanted to do everything herself.

My husband and I sat down together during her nap that afternoon. He said, “Why don’t we just let her do everything herself when she wakes up?”

Just like me? The lady who walked away in frustration just hours earlier, tears in my eyes from feeling clueless as a mom?

Just like me. Something clicked. She was no longer my baby. She is almost three. We have taught her from the beginning to do things on her own. Told her how to do it so she can be big. Is this the moment when we need to just let her do it?

That evening we ate dinner on our back deck. We used the China my grandmother bought us for our wedding- around $40 a plate. Phoebe was done eating and hopped down from her chair. She grabbed the plate off the table and I made a move to stop her.

My husband held his hand out- “Let’s just see what she does.”

I paused and watched. She put the plate on the deck, let the dogs lick it clean (yes we are those people), picked it up, opened the sliding glass door, walked into the kitchen, opened the dishwasher, put the plate in, and closed it back up. 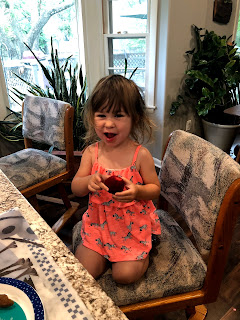 At that moment, I let go. No more babies in our house. We had a big girl. I let her do more and now she is capable of so much more than I thought:

She gets both mine and hers toothbrushes ready in the morning

She dresses herself and asks which feet her shoes go on

She combs her hair

She pours juice and milk for herself

She picks out her bedtime books

And the biggest one... she’s officially potty trained, two weeks after we let her be big.

She has to be a person someday. We chose that day to let her just be herself. Two months shy of three, and she’s more independent than I could ever dream. But guess what... we don’t fight anymore, and neither one of us are in tears.

I let go. She stepped up. What a wonderful child- I’m so happy my husband told me to just let her do it.
Posted by southwindjillian at 1:17 PM